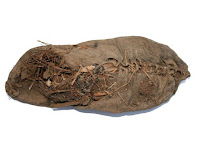 This Shoe Had Prada Beat by 5,500 Years
Think of it as a kind of prehistoric Prada: Archaeologists have discovered what they say is the world’s oldest known leather shoe
Perfectly preserved under layers of sheep dung (who needs cedar closets?), the shoe, made of cowhide and tanned with oil from a plant or vegetable, is about 5,500 years old, older than Stonehenge and the Egyptian pyramids, scientists say. Leather laces crisscross through numerous leather eyelets, and it was worn on the right foot; there is no word on the left shoe.

While the shoe more closely resembles an L. L.Bean-type soft-soled walking shoe than anything by Jimmy Choo, “these were probably quite expensive shoes, made of leather, very high quality,” said one of the lead scientists, Gregory Areshian, of the Cotsen Institute of Archaeology at the University of California, Los Angeles.

It could have fit a small man or a teenager, but was most likely worn by a woman with roughly size 7 feet. (According to the Web site www.celebrityshoesize.com, that would be slightly roomy for Sarah Jessica Parker, whose Manolo Blahniks are size 6 ½, and a tad tight for Sarah Palin, who, during the 2008 campaign, wore red Double Dare pumps by Naughty Monkey, size 7 ½.)

The shoe was discovered by scientists excavating in a huge cave in Armenia, part of a treasure trove of artifacts they found that experts say provide unprecedented information about an important and sparsely documented era: the Chalcolithic period or Copper Age, when humans are believed to have invented the wheel, domesticated horses and produced other innovations.

Along with the shoe, the cave, designated Areni-1, has yielded evidence of an ancient winemaking operation, and caches of what may be the oldest known intentionally dried fruits: apricots, grapes, prunes. The scientists, financed by the National Geographic Society and other institutions, also found skulls of three adolescents (“subadults,” in archaeology-speak) in ceramic vessels, suggesting ritualistic or religious practice; one skull, Dr. Areshian said, even contained desiccated brain tissue older than the shoe, about 6,000 years old.

“It’s sort of a Pompeii moment, except without the burning,” said Mitchell Rothman, an anthropologist and Chalcolithic expert at Widener University who is not involved in the expedition. “The shoe is really cool, and it’s certainly something that highlights the unbelievable kinds of discoveries at this site. The larger importance, though, is where the site itself becomes significant. You have the transition really into the modern world, the precursor to the kings and queens and bureaucrats and pretty much the whole nine yards.”

Previously, the oldest known leather shoe belonged to Ötzi the Iceman, a mummy found 19 years ago in the Alps near the Italian-Austrian border. His shoes, about 300 years younger than the Armenian shoe, had bearskin soles, deerskin panels, tree-bark netting and grass socks. Footwear even older than the leather shoe includes examples found in Missouri and Oregon, made mostly from plant fibers.

The Armenian shoe discovery, published Wednesday in PLoS One, an online journal, was made beneath one of several cave chambers, when an Armenian doctoral student, Diana Zardaryan, noticed a small pit of weeds. Reaching down, she touched two sheep horns, then an upside-down broken bowl. Under that was what felt like “an ear of a cow,” she said. “But when I took it out, I thought, ‘Oh my God, it’s a shoe.’ To find a shoe has always been my dream.”

Because the cave was also used by later civilizations, most recently by 14th-century Mongols, “my assumption was the shoe would be 600 to 700 years old,” Dr. Areshian said, adding that “a Mongol shoe would have been really great.” When separate laboratories dated the leather to 3653 to 3627 B.C., he said, “we just couldn’t believe that a shoe could be so ancient.”

The shoe was not tossed devil-may-care, but was, for unclear reasons, placed deliberately in the pit, which was carefully lined with yellow clay. While scientists say the shoe was stuffed with grass, acting like a shoe tree to hold its shape, it had been worn.

“You can see the imprints of the big toe,” said another team leader, Ron Pinhasi, an archaeologist at University College Cork in Ireland, who said the shoe resembled old Irish pampooties, rawhide slippers. “As the person was wearing and lacing it, some of the eyelets had been torn and repaired.”

Dr. Pinhasi said the cave, discovered in 1997, appeared to be mainly used by “high-status people, people who had power,” for storing the Chalcolithic community’s harvest and ritual objects. But some people lived up front, probably caretakers providing, Dr. Areshian said, the Chalcolithic equivalent of valet parking.

Many tools found were of obsidian, whose closest source was a 60-mile trek away. (Perhaps why they needed shoes, Dr. Areshian suggested.)

“It’s an embarrassment of riches because the preservation is so remarkable,” said Adam T. Smith, an anthropologist at the University of Chicago who has done separate research in the cave. He said that distinguishing Chalcolithic objects from later civilizations’ artifacts in the cave had been complicated, and that “we’re still not entirely clear what the chronology is” of every discovery.

“The shoe,” he said, “is in a sense just the tip of the iceberg.” (He probably meant to say wingtip.)

Disqus for My blog